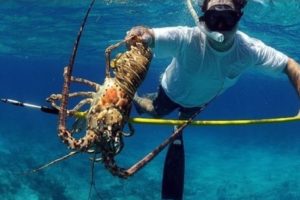 The recreational season for West Coast Rock Lobster (WCRL) has been announced and will open on Saturday, 15 December 2018.

The 2018/19 CRAYFISH SEASON will be restricted to 12 days and fishing will be allowed as follows:

Attention is also drawn to Regulation 51, issued under the Marine Living Resources Act 18 of 1998 (MLRA), which provides that only persons over the age of 12 years may obtain from any authorized office, a recreational fishing permit to engage in fishing, collecting, keeping, controlling, landing or transporting of, or to be in possession of not more than four WCRL per day subject to the payment of R94 per permit (R7 application fee and R87 permit fee) as determined by the Minister under section 25 of the MLRA and published under Government Notice No. 795 in Government Gazette No. 33518 of 10 September 2010.

Fishing times for WCRL will be from 08h00 until 16h00 and the bag limit is four per person per day and the size restriction is 80 millimetres carapace length.

No person catching WCRL with a recreational fishing permit may sell his/her catch and any WCRL caught, collected or transported must be kept in a whole state.

For further information please contact the Department of Agriculture, Forestry and Fisheries (DAFF) on 021 402 3120 or
E-mail: WendyW@daff.gov.za